So, rockinaseaofchaos and I were sitting on the patio, smoking (tobacco) pipes and enjoying holiday beverages on a school night. The first bevvie isn't a holiday offering per se, but was perfect. New York's Southern Tier Creme Brulee Stout is a craft brewed Imperial Stout brewed with vanilla beans. Dark and delicious and 10% ABV. It's not available in Texas but I brought a bottle back from South Carolina. The second selection was a bottle of Anchor Christmas, an annual offering that is usually not a big deal. The difference is that this bottle was from 2004 and had been tucked away in my garage fridge for seven years. It poured an impressive head and had that great piney aroma the beer is famous for. It was great to see (and taste) that a well crafted beer can thrive after an extended period of rest. 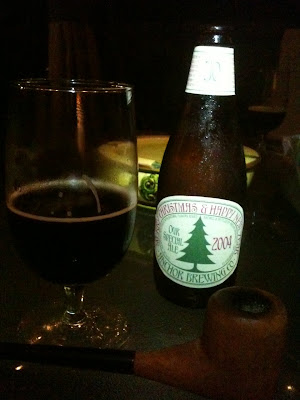 I qualified for my CHL with the Ruger SR1911. It is a fantastic full-size 1911, but a little substantial for everyday carry. I carried it in a Bianchi shoulder rig last weekend and it was a little tiring by the end of the day. That's when I decided to look for a carry .45. I really like the Kimber Stainless Pro Carry but it is a bit expensive and wouldn't pass the WAF (wife approval factor).


After some searching, Rockinaseaofchaos and I went to Central Texas Gunworks. They had a Kahr PM45 in their preowned case. I'm not usually a fan of polymer pistols but Elmer showed my why this one was different. It's really small, holds 5+1 (or 6+1) rounds of .45 ACP and fits nicely in my hand. I picked it up Saturday and will be headed to the range for a little run through on Monday. Thanks to Mike, Scott and Elmer for all their help.

PS-
It was great not to have to wait for four days to pick up the pistol; CHL is my friend!! 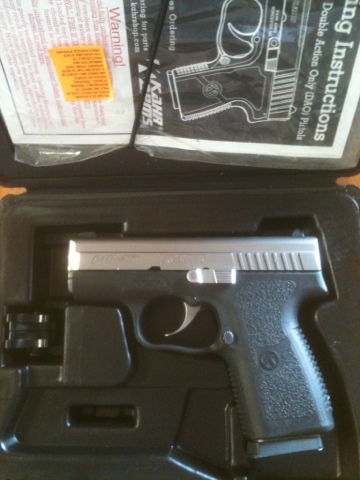 Today, for the first time, I exercised my constitutionally guaranteed and state approved right to carry concealed in public. My weapon did not kill anyone.
Posted by MI2TALL at 2:39 PM 3 comments:

It could have been much worse, but it bled like crazy... 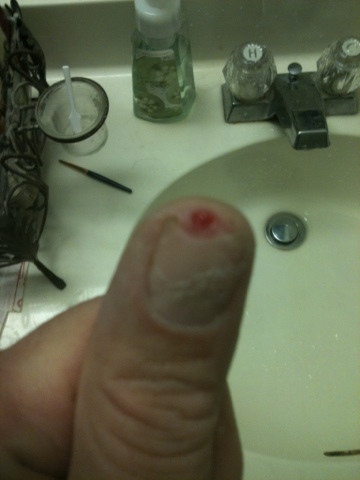 I was in NC last week and had breakfast at a local spot call Brigs. I had grits and eggs because I darn sure wasn't going to have any of these... 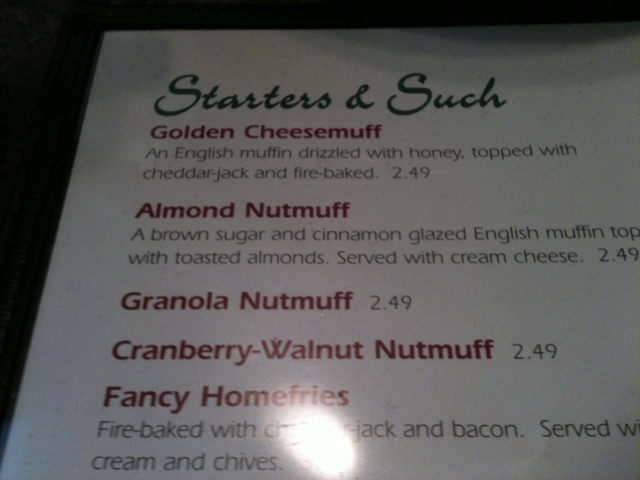 Took my Texas CHL class last weekend with the wife of rockinaseaofchaos . It was informative and despite my concerns about qualifying with the SR1911 (which I'd only taken to the range twice before), I shot 239 out of 250. Not too bad for a guy with a space age eye. 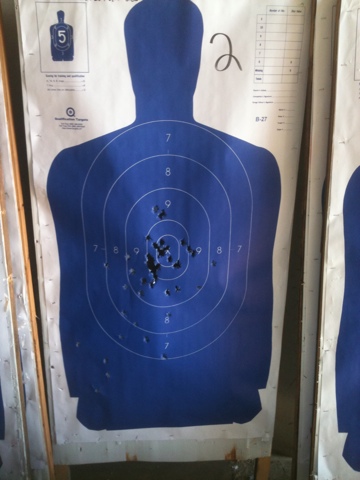 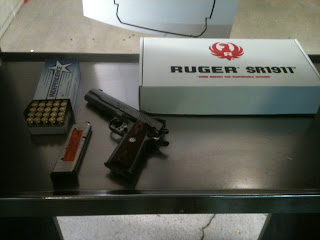 Rockinaseaofchaos and I went to pick up MY SR1911 today. We took it to Red's and put a quick 50 rounds through it. It ran like a champ; not a single FTF or FTE. I'm really going to like this.

Oh Yes...It Will Be Mine 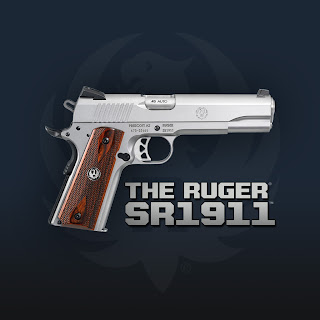 So, Rockinaseaofchaos suggested that I call McBride's again on Friday, as we approach the 2 month mark since putting a deposit down on the Ruger SR1911. I had even stopped carrying around the deposit receipt every day because it just made me sigh as I took it out of my pocket every night; like a love note from a secret admirer.
The first time I called, Butch, the buyer was on another line and I was asked to call back later (no hold button, I guess). When I called back, I got cut off waiting for Butch to pick up. Grrrrr. The third time I got him on the line. He put me on hold, and came back in a minute with the news I didn't think I'd hear until Christmas. "It just came in. We tried to call you but the number was wrong." He read my correct cell number back to me so I chalked it up to an ID10T error. I told him I'd be by later to pick it up.
Those of you that have followed me know that due to circumstances as yet unexplained, I get delayed EVERY STINKIN' TIME I try to buy a firearm. I have purchased several rifles and been delayed on every one except for a FtF purchase from a friend.
Never denied, always delayed.
This time was no different...I can pick it up on Thursday morning.
I see a long lunch in my future...

Are You Frickin' Kidding Me?!?

For an additional amount for ‘State and Local Law Enforcement Assistance’, $40,000,000, for competitive grants to provide assistance and equipment to local law enforcement along the Southern border and in High-Intensity Drug Trafficking Areas to combat criminal narcotics activity stemming from the Southern border, of which $10,000,000 shall be transferred to ‘Bureau of Alcohol, Tobacco, Firearms and Explosives, Salaries and Expenses’ for the ATF Project Gunrunner.

And you're saying that no one in the Administration knew about it?!?

I have a deposit down on a Ruger SR1911 and I can't wait for it to come in. A US made stainless 1911 for under $700? Whoever heard of such a thing? I haven't had a pistol in about 14 years and I've sorely missed having one. The last one was the perfect carry piece; Smith & Wesson 469 9mm...12+1, bobbed hammer, lo-pro sights and Pachmeyer grips that made it feel like it was part of my hand. Oh, and it was made from METAL!! I still can't get my head around the plastic pistols; they just don't feel right.
I'll post pictures when I get it.

Canucks Jersey...$125
Hipster Haircut...$50
Getting your balls blown off by a flash bang grenade...Priceless 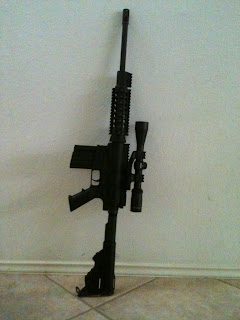 So, the PEPR mount finally came in for the DPMS .308 and I mounted up the Burris Fullfield II 3-9x40 and the Midwest Industries quad-rail foreend. It looks great and I can't wait to get to the range to zero it in. Still looking to add a bipod and 200 watt weapon light. Then, it's Adios Puerco, Hola Carnitas.

BATF and Justice in Deep Mierda

So, in a recent article on Foxnews.com, Congress is about to ream the BATF and the Justice Department over Operation Fast and Furious; a program of allowing and encouraging gun dealers in border states to knowingly sell large quantities of weapons to straw buyers in an ultimately futile effort to track them to Mexican drug gangs. The program spun wildly out of control and most of the weapons disappeared from sight. Some of these weapons have been used to kill Mexican law enforement officers and U.S. Border Patrol agents.

It's ironic that BATF/Justice would allow this to happen with high-velocity, high-capacity, semi-automatic weapons but continues to "Delay" me when I try to purchase a lever-action rifle that fires handgun ammo.

With the huge earthquake in Japan today comes a Tsunami warning for Hawaii. I hope it doesn't wash away Obama's original birth certificate. 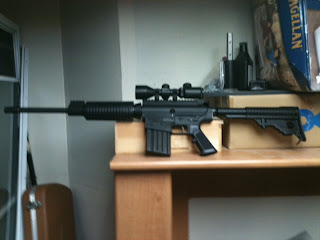 Well, not exactly new...
I finally bought my .308...technically a 7.62x51 (or 7.62NATO) rifle. It is a DPMS Sportical. Need to make a few additions to it, like a quad-rail foreend, BUIS and a better optic. I've decided to sell the WASR to fund the additions, as I've lost faith in it to hit anything beyond 50 yards, and I already have several carbines that can hit dimes at that distance.

So, Rock in a Sea of Chaos and I went to Red's last week for a little end of the year shooting entertainment. I figured that after the success with sighting in the scoped Marlin .44 mag, I'd do the same with the WASR.
It was not to be... :(
Could not get any rounds below the 9-3 line at any distance. Cranked the elevation down 20 clicks at 100 yards but the POI would not drop. Although it is likely a scope issue, it has disappointed me to the point where I am considering using the WASR as *gasp* trade bait. I really want a 7.62 NATO (.308) rifle and I could apply the trade and some cash to secure it. I've looked at converted Saigas and CETME's but narrowed the search down to the DPMS Sportical. It gives the modularity and flexibility that I want without having to learn how to gunsmith. Also, the cost of acquisition is tolerable and might leave enough for a decent optic.